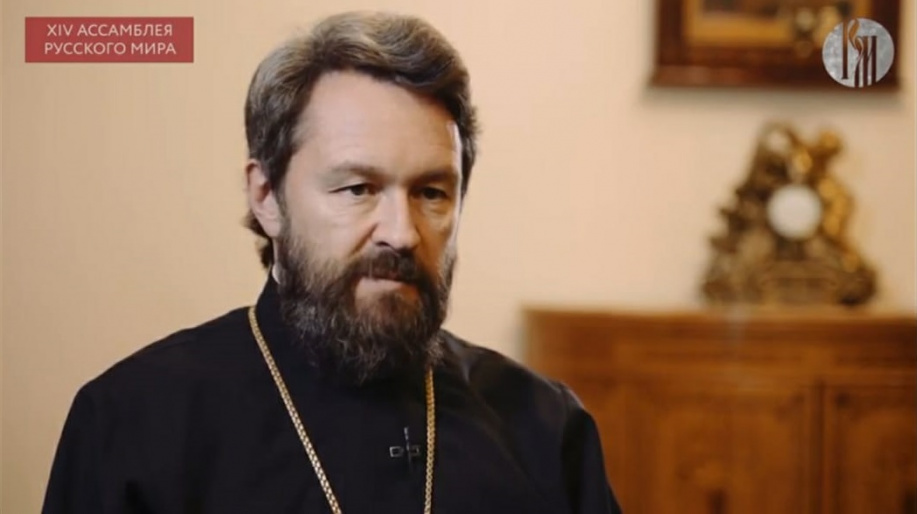 On November 3, 2020, the XVI Assembly of Russki Mir Foundation has opened; this year the forum for the first time is held online.

I cordially greet all of you as well as the friends of the Russian language and Russian culture!

We have approached a memorable date – the centenary of the forced exodus of her faithful sons and daughters from thier Motherland. In November 1920, the last squadrons of the Imperial Black Sea Fleet left the Crimea taking to obscurity those who could not reconcile themselves to the trample upon the faith, ideals and values handed down by ancestors and cherished by contemporaries. Uncommon and sometimes tragic human destinies created a basis for a great community, which we call today the Russian near and far abroad or Russki Mir. It was not only people of noble families who found themselves in diaspora but also people from other estates for whom there was no longer a place in the Motherland. A considerable part of the episcopate, clergy and laity of the Russian Orthodox Church had to suffer the same fate. The arrangement of church administration, the forced break up with the central church leadership that remained in Moscow became a painful wound on the body of our Church. It had to be healed and ways to restore the God-commanded unity had to be found.

The actions of many church workers brought forth their fruits: by God’s mercy, decades later we managed to come to unity. Thus in 2007, the canonical community of the Russian Orthodox Church Outside Russia with the Church in the Motherland was restored, and a year ago today, during the Divine Liturgy in the Church of Christ the Saviour in Moscow, His Holiness Patriarch Kirill presented Archbishop Ioann (Renneto) of Dubna with a charter on restoration of the unity of the Archdiocese of Western European Parishes of Russian Tradition with the Russian Orthodox Church. It has certainly become an historic event for our compatriots living in Europe, the real scale of which can be assessed by historians in future. Looking back at the past, we, with gratitude to God, can speak of the gathering of once dispersed Russian Orthodoxy. His Holiness Patriarch Kirill of Moscow and All Russia testifies: ‘… Perhaps, we had to drain the cup of division begotten by human sin, revolution, civil ear, alienation, and to walk so hard a path so that the Lord might vouchsafe His mercy to us and say: ‘Children, it is enough! Unite!’

This appeal of the Primate of the Russian Church is also addressed to all of our compatriots living today in various states and on various continents. The Church of Christ always was and is a Church of unity. We firmly know that the power of the Church, the power of our people, the strength of the people’s spirit lies in unity and conciliarity.

This year has been especially hard because of the anti-epidemic measures caused by the spread of the coronavirus infection. Thus, for instance, some of our churches abroad were permitted to resume divine services only in the middle of September, after a six months’ quarantine.

Seeking to support parishioners, the Church organized a collection and distribution of foodstuffs and necessities. Wherever possible, with all the precautionary measures observed, the faithful were given communion at home; they were visited by specially trained priests.

Pastoral care and charitable works are especially relevant today when people have come to feel keenly their loneliness. Using modern telecommunication means, we seek to convey to our compatriots the beauty of the Orthodox liturgy, to answer people’s disturbing questions by means of teleconferences. Today, projects for religious education are developed in the online mode.

This extraordinary situation has given us all an excellent opportunity for think over the goal of one’s life. Readiness to support one’s neighbour, to sacrifice oneself in hard conditions – these are the basics of the Russian world and Russian soul.

May God’s blessing and the prayerful intercession of the Heavenly Queen on the eve of the celebration of Her Icon of Kazan be with all of us!