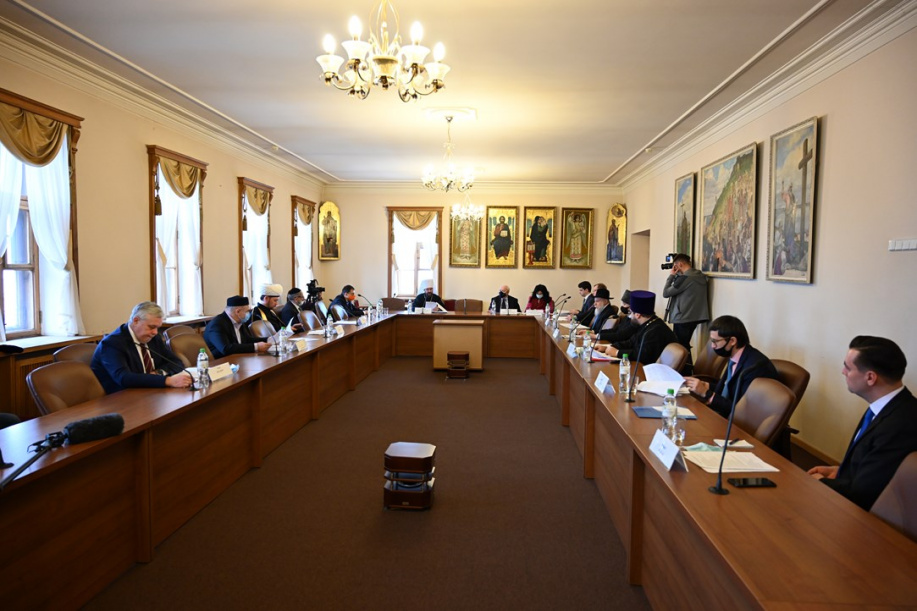 The meeting was addressed by Metropolitan Hilarion of Volokolamsk, a member of the ICR Presidium, chairman of the Moscow Patriarchate’s department for external church relations (DECR). Speaking on behalf of the Interreligious Council in Russia, he warmly welcomed the UN Under-General Secretary, High Representative for the Alliance of Civilizations.

Metropolitan Hilarion noted that Mr. Maratinos was invited to come to Russia by the Russian Ministry of Foreign Affairs and parliament members to discuss preparations for a World Conference for Interreligious and Intercultural Dialogue to take place in May 2022 in Moscow. “I consider as very important”, he emphasized, “the fact that you meet today with heads and representatives of the traditional religious communities in our country, which are members of the Interreligious Council in Russia with His Holiness Patriarch Kirill of Moscow and All Russia as its honorary chairman. In Russia, people of various traditional religions and cultures have peacefully co-existed in Russia for many centuries and accumuled a great experience of interreligious dialogue and cooperation”.

The DECR chairman also said, “Representatives of the Church in their speeches at Alliance’s recent forums and meetings with its leaders voiced an important idea: this initiative could be even more successful if it would imply the development of a direct dialogue of religious communities with the world community. In this connection, we have proposed to form a consultative council of religions under the UN aegis. This idea has not lost its relevancy.

This Eminence also expressed a conviction that the preparations for holding a World Conference of parliament leaders and world religious leaders on inter-cultural and interreligious dialogue cannot be held without the participation of heads and representatives of traditional religions and expressed hope that the present meeting contribute to its preparation.

He introduced the guest to the principles of the IRC work, noting, “Throughout the years of its existence the Council has participated in the development of key decisions concerning the state-religions and interreligious relations in our country. It can be stated that the IRC’s work and its decisions have held the mirror up to the most important problems of concern for our society”. It was emphasized that the IRC’s work is based on the principles of direct, equitable and open dialogue: “It excludes debates on theological issues dividing us but is focused on topics of our common interest. Among them is the traditional family morals, protection of the life of unborn children, combat with the spread of the ideology of extremism and many other issues”.

In his remarks, the UN General Under-Secretary, High Representative for the Alliance of Civilizations stressed, “It is a great honour for me to be with you today. I remember my meeting with His Holiness Patriarch Kirill of Moscow and All Russia in Baku about a year ago. I promised him that I would come to Moscow and meet with Metropolitan Hilarion and with all of you in order to promote our dialogue”.

Speaking about the World Conference on Interreligious and Interethnic Dialogue to take place next year in Russia, Mr. Moratinos said, “Some will ask: why is it important? What do religious leaders meet with politicians for? It is my conviction that we are living now in a new world, in the world of the 21st century when spirituality is returning. In spite of what Friedrich Nietzsche already said that ‘god is dead’, and it can be noted that the 20th century was secular in both Russia and abroad, religious traditions are now coming back to the world. Even such secular countries as France cannot ignore the fact that there is a religious element in the life of society. Nowadays any political leader is already aware that without religious traditions and people of these traditions it is impossible to establish a peaceful existence of society”.

It is for this reason, the guest believes, the initiative to hold a World Conference on interreligious and interethnic dialogue in Russia is so timely. “I am impressed by the work carried out by the Russian Federation in the process of preparing this conference”, he noted pointing to the importance of the participation of religious leaders in this process.

Making comments on the ideas expressed by Metropolitan Hilarion in his remarks about the need to set up a special consultative council of religious leaders under the UN, Mr. Moratinos expressed the conviction that it could be an excellent initiative for the future of the whole humankind. “As a man who has been working in diplomatic structures for a long time, I can assure you that it will not be an easy process and I can also say that it is not impossible. You can rely on my support in this because I believe that it is necessary. There is a UN Security Council, there is a UN Human Rights Council, just as there should also be a UN Council of Religious Leaders who could meet and make some decisions of their own”, he stated.

In the conclusion of his speech, Mr. Moratinos said, “I would like to point out that there are few countries with such an Interreligious Council as you have in Russia and religious leaders working together. I congratulate you and salute your work”.

Brief remarks were also made by heads and representatives of centralized religious organizations, among them members of the Interreligious Council in Russia: Vice-Chairman of the Moslem Board in Russia Damir Mukhetdinov; Chief Rabbi of Russia Adolf Shayevich (Congress of Jewish Religious Organizations and Associations in Russia); representative of the Central Moslem Board in Moscow Shamil Kadyrgulov; President of Jewish Communities in Russia Alexander Boroda; plenipotentiary representative in Moscow of the Moslem Coordinating Committee in North Caucasus Shafig Pshikhachev. They spoke on such topics as relationships between religious traditions and existence of various ways of civilizational development, as well as preparations for the World Conference on Interreligious and Interethnic dialogue. Every speaker thanked Mr. Moratinos for his help in organizing the summit in May 2022 and recognition of the role played by traditional religions in the life of modern society.

Present at the meeting were also Rev. Dimitry Safonov, DECR secretary for interreligious relations; Mr. E. Zayalov, acting head of the International Organizations Department; and Mr. M. Melekh, head of the Department for Relations with the Federation Constituent Regions, Parliament and Public Organizations.

During the meeting, Mr. Stepashin awarded the Interreligious Council in Russia’s Medal “For Contribution to Fostering Interreligious Peace and Accord” to Sergey Melnikov, chairman of the Russian Association for Protecting Religious Freedom, who was a long-standing executive secretary of the Presidential Council for Cooperation with Religious Associations, and who became the head of the Russian Association for Religious Freedom in August 2020. The IRC award was established in the end of 2019; it is conferred by the unanimous decision of all the members of the organization. 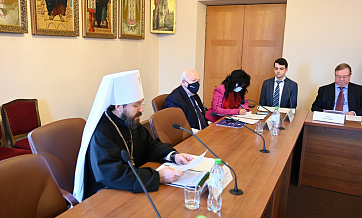 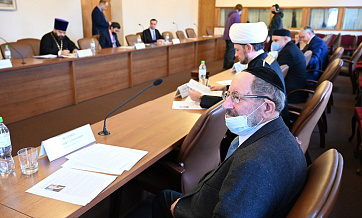 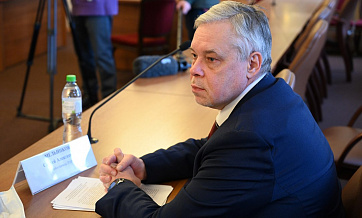 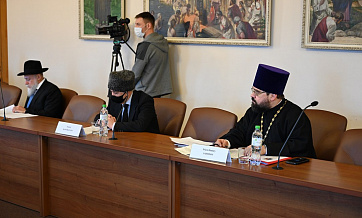 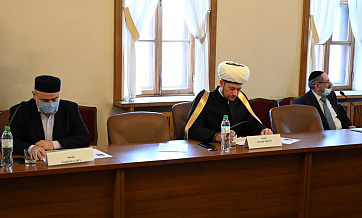 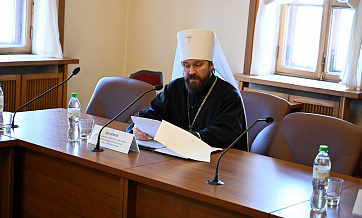 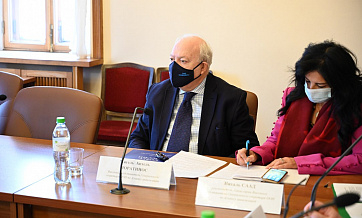 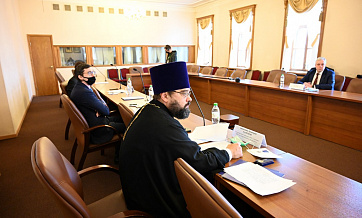 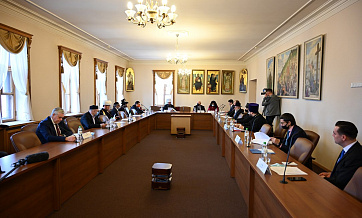 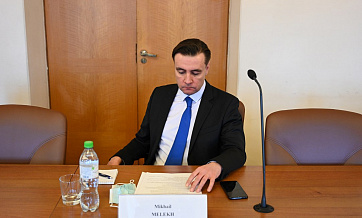 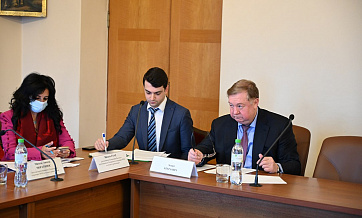 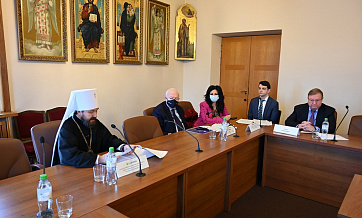 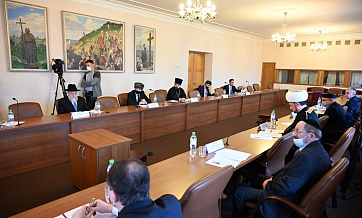