Metropolitan Hilarion celebrates Divine Liturgy on the relics of St. Nicholas the Wonderworker in Bari

Metropolitan Hilarion celebrates Divine Liturgy on the relics of St. Nicholas the Wonderworker in Bari 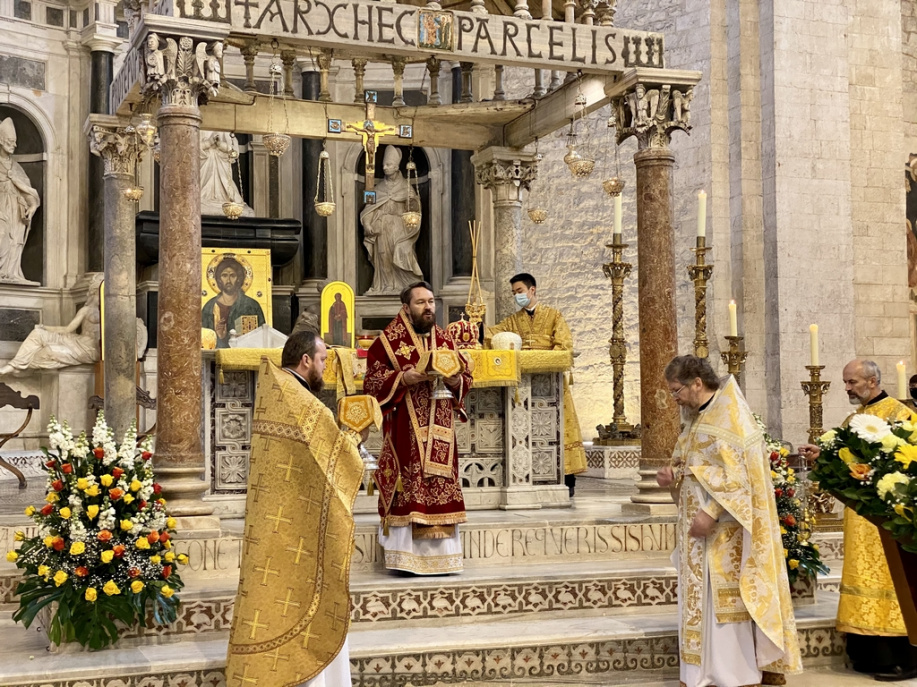 On 19th December 2020, commemoration day of St. Nicholas the Wonderworker, Archbishop of Myra in Lycia, Metropolitan Hilarion of Volokolamsk, chairman of the Moscow Patriarchate’s Department for External Church Relations, while on a working visit to Bari, Italy, officiated at the Divine Liturgy in the Basilica of St. Nicholas, on the holy relics of this saint.

Concelebrating with the archpastor were Archpriest Vyacheslav Bachin, rector of the Patriarchal Metochion of St. Nicholas the Wonderworker in Bari, and Archimandrite Avgustin (Morozov), rector of the Parish of the Holy Apostle Matthew in Salerno.

After the Litany of Fervent Supplication Metropolitan Hilarion lifted up a prayer read at the time of baneful pestilence.

The Liturgy was followed by a homily, in which the archpastor said, in particular:

“I wholeheartedly greet you with the commemoration day of St. Nicholas the Archbishop of Myra in Lycia.

“Today once again, like in the previous years, the Lord has gathered us, despite the difficult circumstances, here, in this sacred basilica where the healing relics of St. Nicholas the Wonderworker have reposed for many centuries.

“He is a saint venerated all over the world, in the East and the West, in the North and the South. In every corner of the earth people turn to St. Nicholas in prayer and miraculously receive assurances that he hears and answers their prayers. I believe that in the life of all those who have assembled here and those who in other places are celebrating the commemoration day of Nicholas the Wonderworker today, there were such occasions which clearly showed St. Nicholas’s presence in our life. These are great miracles and lesser miracles, as well as the occasions when St. Nicholas responds to our supplications pertaining to some mundane matters. There are great many stories of the kind, and were every one of them to be described, “the world itself could not contain the books that would be written” (Jn 21:25).

“Our Lord Jesus Christ brought into this world a special mode of holiness. For centuries the saints who were following the path of the Lord’s commandments, looking at His sacred image and imitating Him, became a rule of faith and an image of humility. Fearlessly, they confessed the Orthodox faith. Had heresies emerged, they fought against them; had a schism or other hardships for the Church arisen, they devoted all their energy to defending the unity of the Church. Yet, at the same time they remained meek and humble in the image of the One Who said about Himself: “Come to me, all who labour and are heavy laden, and I will give you rest. Take my yoke upon you, and learn fr om me; for I am gentle and lowly in heart, and you will find rest for your souls” (Mt 11:28-29).

“When coming to our Lord Jesus Christ with a prayer of repentance or thanksgiving, when coming in order to partake of His Holy Mysteries during the Divine Liturgy, we take in the Most Pure Body and the Most Precious Blood of our Lord the Saviour and feel this Divine world entering and filling our hearts.

“We pray to the Lord and to the saint pleasing unto Him in supplication that He may preserve us in peace, godliness and purity. We pray to the Lord for the repose of all those who passed away. Every day in the news we hear that more and more people died, and we pray that the Lord may give rest to them with the saints, wh ere sickness and sorrow are no more, neither sighing, but life everlasting.

“Despite all the restrictions and difficulties, the Lord has vouchsafed us to arrive in this holy place today in order to venerate the relics of St. Nicholas the Wonderworker. We have prayed here not only on our own behalf, but on behalf of all those who wanted to come, but could not do it by force of the circumstances known to us. We have prayed for our relatives and friends, for our peoples, countries and the whole world.

“Now we will go down into the crypt, to the relics of St. Nicholas the Wonderworker, and once again offer him our ardent prayer and ask for his mercy and help in our life’s journey. Let us pray at his relics, entreating him to be our merciful intercessor and to help us overcome all afflictions and temptations of this transient life, and to lead us on the path to the Heavenly Kingdom.”

A prayer service on the saint’s relics followed. Fr. Giovanni Distante, rector of the Basilica of St. Nicholas, greeted Metropolitan Hilarion and presented him with a vessel containing the myrrh from the relics of St. Nicholas the Wonderworker.

Having expressed his gratitude for the warm welcome, Metropolitan Hilarion said, “I would like to cordially thank Father Giovanni and the Friars of the Dominican Monastery who for many centuries have cherished the relics of St. Nicholas the Wonderworker and in the past decades opened the doors of this church to Orthodox pilgrims from Russia, Ukraine, Belarus, Moldova and other countries, coming here to venerate the saint held in reverence in the East and the West, in the North and the South. Dear brethren, I would like to wish you the soonest cessation of the ordeal that has befallen all of us.” 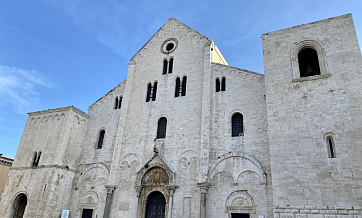 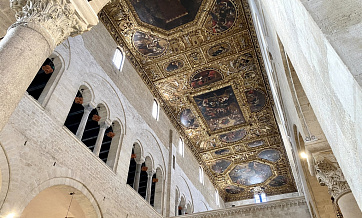 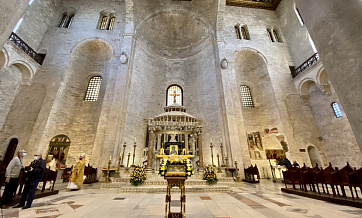 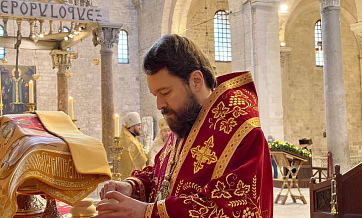 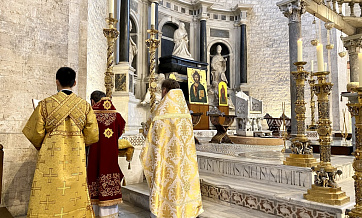 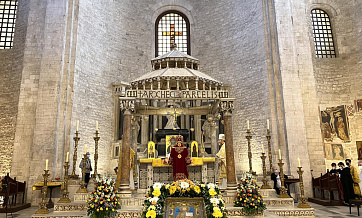 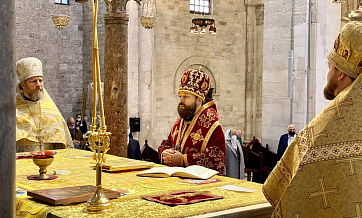 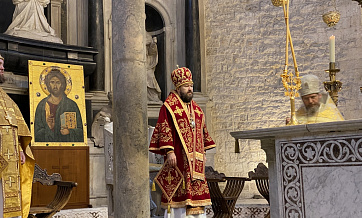 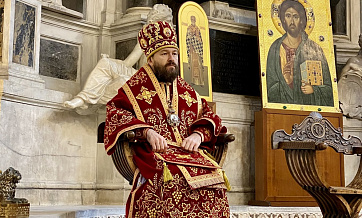 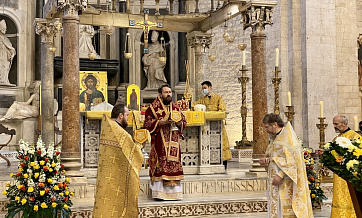 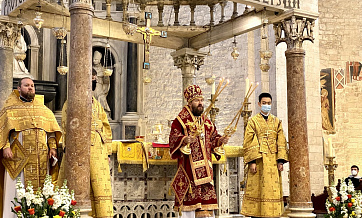 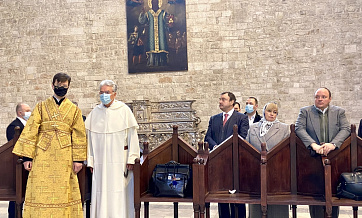 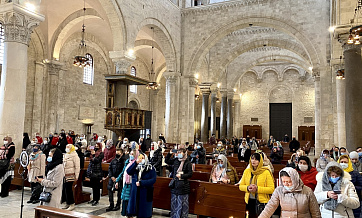 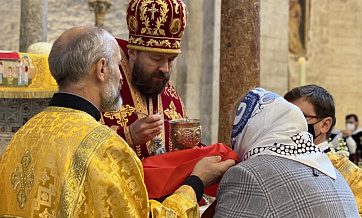 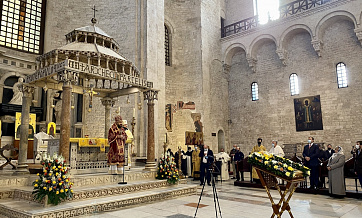 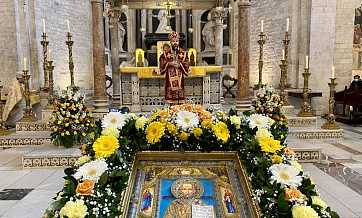 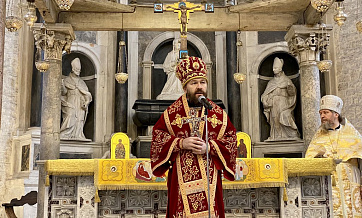 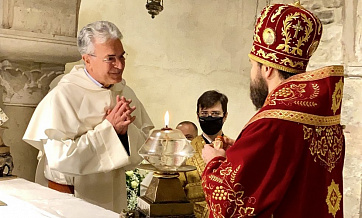 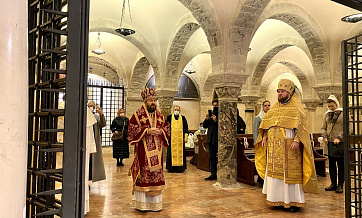 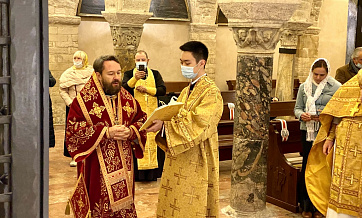